Fertilisers for native plants in gardens

Finally, we come to the trace elements. The trace elements that are essential for all plant growth are: Iron (Fe); manganese (Mn); copper (Cu); zinc (Zn); boron (B); molybdenum (Mo); chlorine (Cl) and nickel (Ni).

Copper is a difficult one. There have been reports of copper deficiency in eucalypts being established on farm land. This deficiency is caused by a high concentration of phosphorus in the soil from the application of phosphatic fertilisers to crops or pastures. I have no idea what might happen to other native plants in an urban garden. My guess is that it is of minor concern, mainly because when irrigation water is supplied through copper pipes and brass fittings, it dissolves some copper that is then added to the soil during irrigation. I think that for most urban gardens there is little likelihood of copper deficiency, unless your soil has had super-high applications of phosphorus. 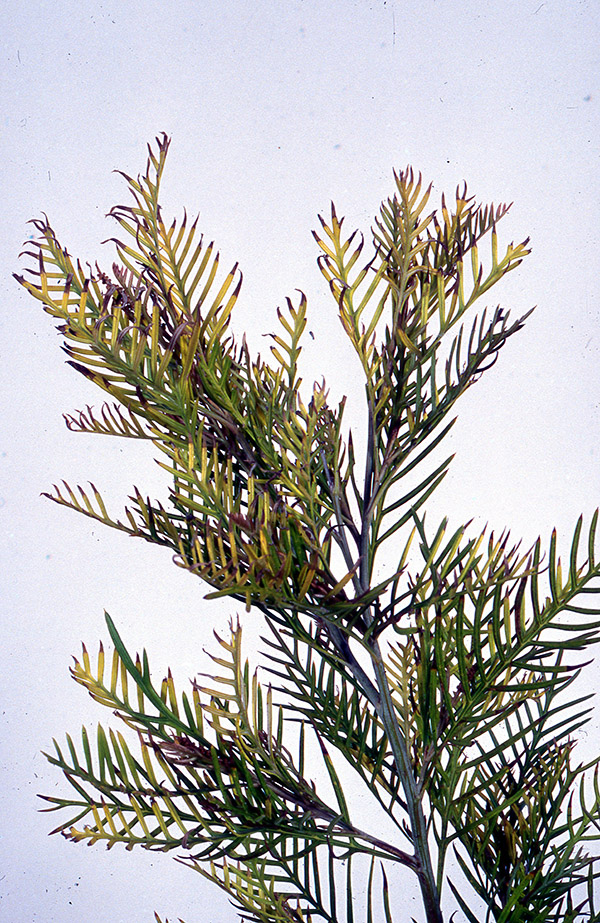 Both iron and manganese deficiencies may be produced in native plants that are being grown in a soil whose pH is much higher than those on which the plants grew naturally. These deficiencies show up as yellowing of young leaves. Iron deficiency is far more common than manganese deficiency. There is no point in adding any iron sulphate or the iron chelate FeEDTA to the soil as the lime in the soil will just take the iron out of circulation. This comment applies equally to the tiny amounts of iron that are often included in mixed fertilisers. You might get a bit greening from the iron chelate FeEDDHA (sequestrene), but really, the best action is to  replace the plant with one from an alkaline soil area. However, if you really want to grow this particular plant, you should be able to green it up by augering or digging holes into its rootzone, to a depth of about 300 mm, and stuffing a potting mix-iron sulphate mixture into the holes. (1 cupful of iron sulphate to 9 litres of potting mix). The iron in this mixture is isolated from the lime in the soil and so provides an ongoing source of iron to plant roots.

Fertiliser use at planting

Fertiliser use after establishment

Nutrients other than nitrogen and phosphorus